Let me tell you about the time I….was almost killed by Robbie Williams

Emma here from Living Easy Loving Free, delighted to be in for Hermia while she’s on the move.

So let me tell you about the time….Robbie Williams almost killed me!
Back in the day I was a huge Robbie Williams fan, who couldn’t resist the bad boy with the bleached blonde hair?? (please bear in mind it was the 90s!)  So when Robbie’s concert was announced for Dublin myself and my best friend Sharon begged, borrowed and baby-sat until we got the much coveted tickets in our little hands….

At the concert we managed to blag our way into The Pit, where we came face to face with the extreme Robbie fans…you know the type, armed with signs, banners, t-shirts and all other sorts of Robbie paraphernalia! We tried our best to get up to the stage but met with elbows, nudges and crazy eyed girls with dirty stares we decided for our own safety – mid pit would be the perfect spot.

All was going well until the encore when Robbie wiped his sweaty face &amp; chest with a towel and threw it into the crowd. Like a heat-seeking missile it hurtled straight towards me. It didn’t miss its target, smacking me straight in the face &amp; then wrapping around my neck! To make matters worse some crazed fans behind me grabbed it! Sheer panic struck in…I was being choked by ROBBIE WILLIAMS SWEAT TOWEL!!! 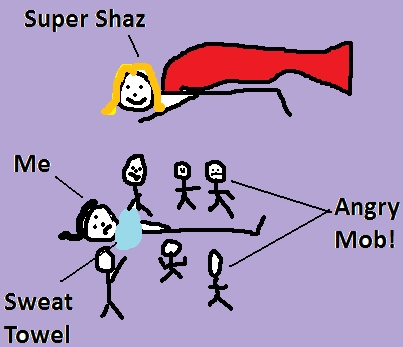 Within seconds I was on the dirty floor being stood on by runners, boots and high heels, dozens of sweaty hands were desperately swiping at me in search of the towel. Just when I thought this was how I was going to meet my end, my friend Shaz in super-hero style somehow managed to clear the crowd and pull me from the ground. At a tiny size 8 she may be small but she’s feisty!

We didn’t have time to celebrate, two sneaky fans grabbed on to the towel as I was resurfacing and we found ourselves in a Mexican Standoff! Myself and super-hero Shaz were holding on tight also, nobody willing to give up! Not even my near death experience could guilt them into letting go…believe me I tried!!

It was only when a flock of screaming girls arrived over trying to claim a stake in the towel that our Mexican Standoff suddenly became more like a survivor team challenge. The four of us worked together to beat off the other competitors. With some quick thinking we waded through the packed pit and eventually we made it to the first aid crew…they kindly cut the towel and we divided out our prized possession…

So what became of my Robbie Williams sweat towel…framed and mounted proudly on my wall??

I’m afraid not….I came home from school one day to find it missing from my room.
“Mam where’s my Robbie Williams sweat towel?” I shouted (as you do when you live at home…god forbid you would look yourself!)

“Your what?” Right then and there I knew by her tone something was up! My mam had a habit of putting things into a “safe place” and they are never seen again! I barged into the kitchen “The towel that was in my room – my Robbie Willliams towel?”

She looked on the floor by the door…..I spun around in slow motion, there in a wet heap was my towel which she had used to mop our kitchen floor!!!! “No!!!!!!

Filed under Let me tell you about the time I....

8 responses to “Let me tell you about the time I….was almost killed by Robbie Williams”

G'wan....you know you've got something to say.... Cancel reply